Below is a list of current and past projects in which I have been involved as a principal investigator or as research associate/graduate researcher.   The most recent projects are at the top.

NEXT GENERATION OF EARTHQUAKE-RESISTANT STRUCTURAL WALLS

Project scope (2013- )
Reinforced concrete (RC) structural walls are an efficient type of lateral load resisting system frequently found in buildings located in regions where lateral demands (caused by wind or earthquake actions) are significant.  In Canada, a large number of buildings (apartment complexes, hospitals, industrial and nuclear facilities) rely on structural wall systems to resist lateral loads caused by earthquake actions.  Past performance during recent earthquakes (Chile, 2010; Tōhoku, 2011; Christchurch, 2011) has shown that buildings and bridges with adequately designed structural walls generally met the “no-collapse” safety objective, but severe damage and permanent in-plane and out-of-plane deformations were frequently observed. For many of the affected structures, costly assessment, repair or demolition activities will be needed after extreme seismic events.  The implications of these findings for the Canadian public are far-reaching.  In addition to the significant economic burden involved in repairing a damaged building, the shut-down of critical structures (such as hospitals, bridges, nuclear and telecommunication facilities) may be catastrophic during the post-earthquake relief efforts.

Recent studies have shown the benefits of using materials and details such as superelastic shape-memory alloys (SMA), engineered cementitious composites (ECC), high-performance fibre reinforced concrete (HPFRC) and postensioned systems (PT) to enhance the seismic performance of bridge and building structural systems, in terms of minimization of damage and reduction of permanent deformations.  Although considerable analytical and experimental research on these innovative materials has been conducted on the area of bridge columns, shear wall coupling beams and moment frames in buildings, relatively few studies have explored their implementation on structural RC walls.  This research aims to show how advanced materials and details can be used to enhance the seismic performance of RC buildings and bridges with structural walls and improve post-earthquake serviceability of Canadian infrastructure.

FRP SYSTEM FOR REPAIR AND STRENGTHENING OF REINFORCED-CONCRETE SHEAR WALLS
Project scope (2010- )
The objective is to develop a set of retrofit techniques for repair of aging and damaged infrastructure using FRP material aimed to fulfill the objectives set by the funding agency (cost-effective, innovative techniques suitable for inclusion in the seismic FRP-retrofit guidelines for Canada, CAN/CSA-S806-02), as stated by the CSRN website (http://csrn.mcgill.ca/main.html).  Thus, results obtained in this study will be used to remedy structural deficiencies in older constructions such as apartment buildings, hospitals, and schools under seismic risk throughout Canada.  This is a project sponsored by the Canadian Seismic Research Network [CSRN] to develop non-disruptive, low-cost rehabilitation schemes using fibre-reinforced polymer (FRP) tow sheets.Tasks: design of shear wall specimens, seismic testing (Fig. 1), development of repair and strengthening schemes using FRP, processing of experimental data, analytical modeling and development of guidelines for use in provisions for FRP-reinforced structures.
In the analytical portion of the project, a simple procedure to simulate the separation of the FRP laminate from the concrete substrate caused by the opening up of flexural cracks in the concrete (Fig. 2) has been developed.  This method enables an accurate calculation of the load-carrying capacity of the walls (if FRP-concrete debonding is not taken into account, as assumed in most of the published literature on FRP-reinforced structures, the load carrying capacity is generally overestimated by 30-50%).

At the North bent of the bridge, SMA material was selected because of its ability to undergo large strains but recover its shape upon stress removal, while ECC was chosen due to its high ductility and tensile strain capacity. At the Middle bent, the columns were post-tensioned to enhance the recentering capability for the columns. At the South bent, a built-in rubber pad was used to replace concrete in the bottom plastic hinges of columns to avoid concrete damage; post-tensioning was used to enhance the recentering ability of the columns. The remainder of the columns in the SMA and ISO piers was constructed with conventional RC to provide a response comparison between innovative materials and RC construction within the same column. 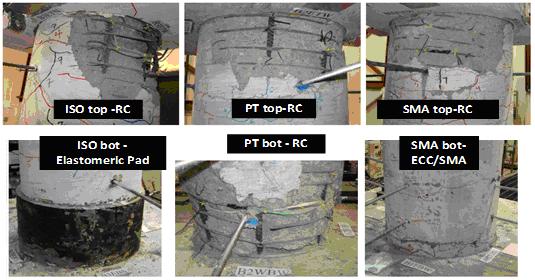 The bridge was modeled the bridge with both commercial (SAP2000) and research-oriented finite-element packages (OpenSEES) to replicate the bridge response (the objective was to show that commonly used software could be used to model the high-performance materials). Computer simulation was crucial for the success of the experiment at the pre-test and post-test stages. The response of the innovative materials was successfully captured by existing element and material formulations. Close agreement was found between the calculated and measured bridge response parameters. The comparison between the model and the experimental response of the bridge can be seen in the following videos:

Video: South view of the 33-bridge subjected to Northridge earthquake

Video: Bent with elastomeric pads during Northridge earthquake (notice the bottom portion of the columns, made with a material similar to the tires of your car).