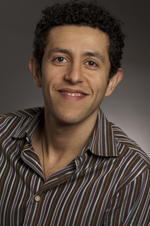 Dr. Samer Adeeb is a professor in the Department of Civil and Environmental Engineering at the University of Alberta. Dr. Adeeb is an expert in finite element analysis for Structural Engineering and Biomedical Engineering applications. He finished his Ph.D. at the University of Calgary in 2004 in which he highlighted the structural role of labra and menisci like structures in diarthrodial joints. Dr. Adeeb then worked in the pipeline industry for two and a half years conducting research in the buckling of pipelines. He then went back to academic for a short post-doc in the human performance laboratory until he joined the University of Alberta in 2007. Dr. Adeeb’s main area of research is computational mechanics applied to the pipeline industry and biomechanics. In the pipeline industry, Dr. Adeeb’s numerical work focuses on the combined effect of geometric imperfections and material properties on the mechanical response of pipelines under combined loading. In the biomechanics area, Dr. Adeeb studies the variation of the healthy anatomy of various musculoskeletal components. Dr. Adeeb’s laboratory implements modern three dimensional mapping techniques to study the variation of the geometry of diarthrodial joints among individuals. The applications of his research include the design of artificial joint implants. In addition, Dr. Adeeb studies three dimensional measures of symmetry of the torsos of subjects with and without scoliosis in hopes of implementing non-invasive sensitive measures to diagnose and monitor the condition.

Dr. Adeeb is very excited about experimenting with new interactive tools for Engineering education. He believes that these new tools allow the incorporation of “dynamic” examples rather than the traditional textbook “static” examples. Dr. Adeeb has incorporated various WordPress tools and WebMathematica tools in his courses hoping that the materials presented here can be easily understood by Engineering students. Please visit sameradeeb.srv.ualberta.ca for more information.